In the past 45 years there has been a 60% increase in suicide rates worldwide, and the total number of annual suicides stands at almost 1 million. It is therefore vital that nations focus on World Suicide Prevention Day 2018 and develop strategies to help prevent this terrible loss of life. Remember — suicide is preventable.

Although we may see trends at certain times, there is no special type of person that attempts suicide — it can happen to anyone — any age, sex, nationality, culture or religion. However, certain people are more at risk of suicide than others. Suicide is one of the leading causes of death among those aged 18 – 49 years in many countries. For every suicide, 25 people attempt suicide while many others contemplate ways of attempting suicide. It is therefore vital that health agencies work together to address suicidal behaviour.

The suicide rate among males is four times higher than the rate among women. Suicide rates have traditionally been highest among older males, particularly men between 45 and 65, although rates among younger people are also increasing. According to the US Centers for Disease Control and Prevention (CDC), over the past 20 years suicide rates in the US have increased among all sexes, ages, races and ethnic groups.

So what can be done to help those most at risk and prevent suicide? There are a range of suicide interventions that can help lower the suicide rate. These include better access to mental health services for issues such as depression or bipolar disorders, personality disorders, anxiety disorders, various forms of addiction as well as earlier intervention for conditions such as chronic depression. Also, as there are generally more than 20 suicide attempts for each completed suicide, some countries are looking at introducing improved surveillance and monitoring of suicide attempts to assist in the development of suicide prevention strategies.

WSPD 2018 continues to raise awareness of suicide on a personal, community, national and international level and this year takes place on 10th September 2018. It will provide support for those affected by suicide and highlight the fact that suicide can be prevented.

Our resource pack entitled Suicide is Never the Answer provides information on suicide and suicide prevention including:

To find out more about this title and our other resources, email resources@allresources.co.uk. 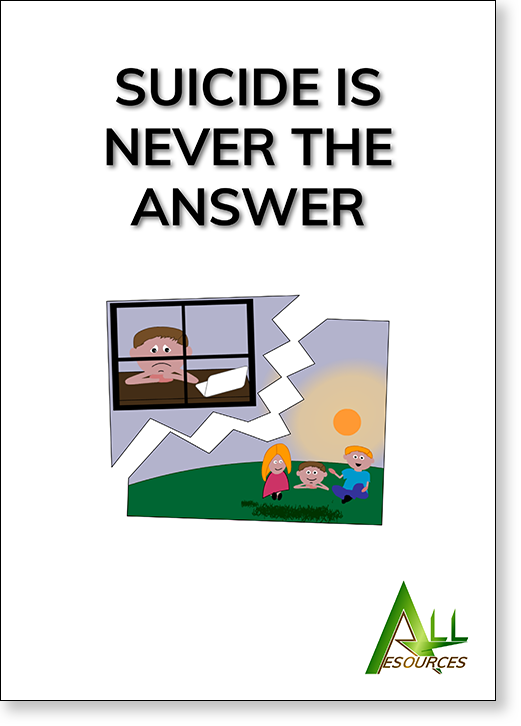